Business in Sport with the Sydney Swans 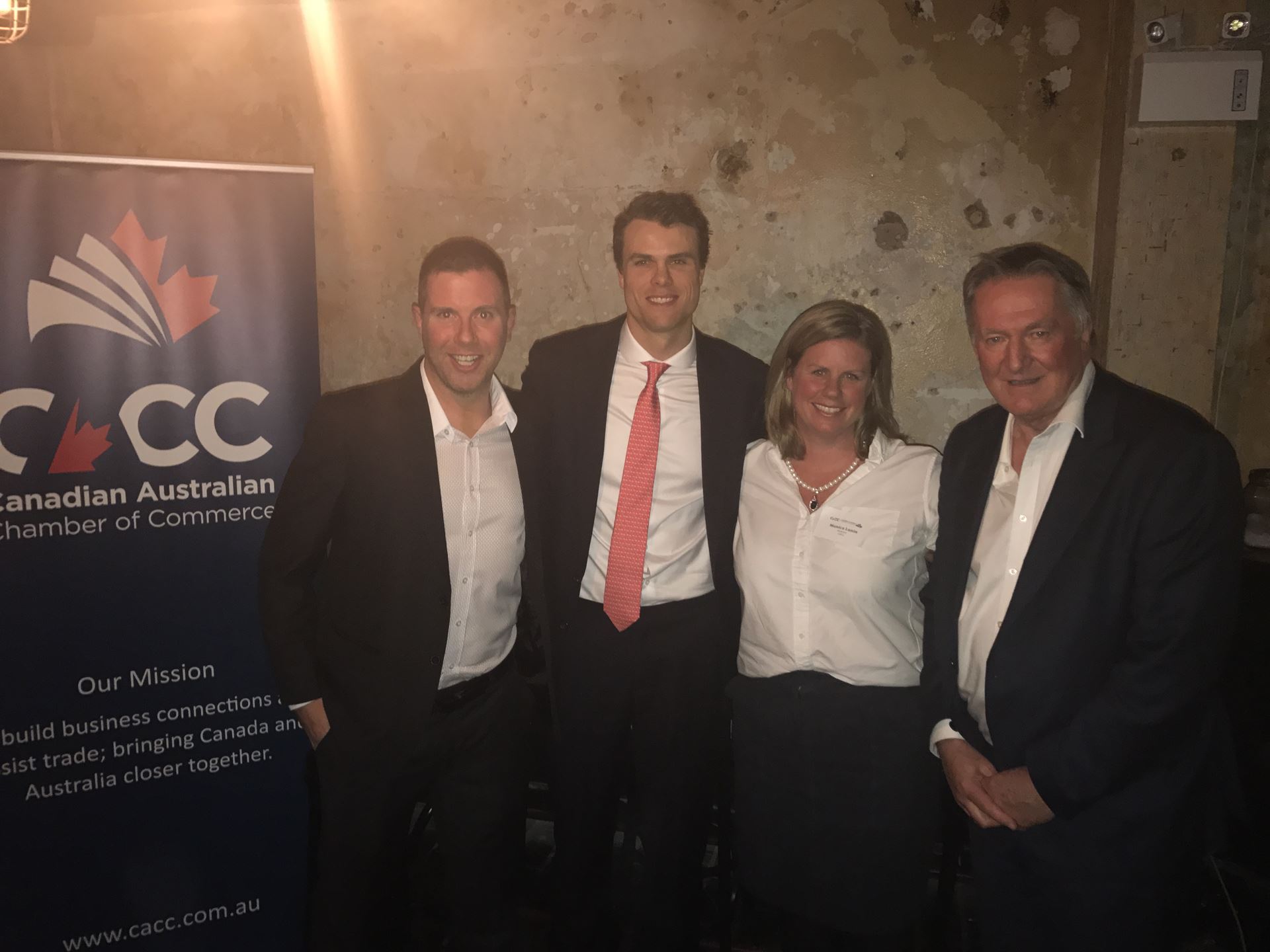 In July, the CACC had the pleasure of hosting Andrew Ireland, CEO Sydney Swans and Mike Pyke, Canadian and ex-Sydney Swans player, to talk about business in sport.  Members were treated to an intimate and honest discussion about the ins and outs of running an AFL team and insights on being a professional athlete.  The Old Growler in Woolloomooloo hosted the event and members were treated to chicken wings and poutine to kick off the evening’s festivities.

Monica Lunin, Director of Mojologic, CACC Director and CACC Events Committee chair, began with a warm welcome to Jack Cowin, CACC Patron and Chairman and Managing Director or Competitive Foods.  Monica also highlighted the mutual love of sports that is shared by both Australians and Canadians with the colours of the Sydney Swans being close to the “hearts of Canadians”.

Jesse Landry, Founder and Publisher of The Australian Business Executive and CACC Events Committee member, moderated the event and started the discussion by recapping the careers of both Andrew and Mike and how they both ended up meeting at the Swans.

In talking about the business of running a sports club, Andrew highlighted how the AFL has been successful at making the competition between teams as equal as possible. He remarked that purely on membership and attendance numbers, some teams would never be able to match the game revenue of the Swans – even if they filled the stadium for every game.

The AFL has been successful at getting high levels of participation. Mike sees it as a family-driven thing: “If you don’t get the basic drivers of participation, generationally, you’re going to struggle.”  The discussion continued with how the AFL has been better at filling stadiums than other codes.  Andrew puts it down to several factors – the long-term investment that the AFL makes at the grass roots level, and that as an Australian-based game, the best players are not interested in going anywhere else.  Andrew also states: “At the of the day, it’s an entertainment vehicle and you need to put the best game on … It’s about having a good team and an attractive sport that [people] can come to in a safe environment.”

As in any business, the success of a sports team depends on the quality of the product.  When the Swans started the season with six losses, Andrew noted that while there was an impact of ticket sales, he was confident that they had the right team to pull through and “to play well for a number of years”.  Mike remarked that the team’s record reflected a “a change in mentality” and credits John Longmire, Swans coach and Josh Kennedy, Swans captain, for turning things around.

Both Andrew and Mike attributed the success of the Swans to the player-ownership culture within the organisation.  Andrew described how in the distant past, everyone on the team was treated the same way.  Now, everyone is treated as individuals, with their own self-defined “trademarks”, and where the standards are “set by the players themselves”.  Mike also mentioned that the Swans have been good at defining clear roles for everyone in the organisation and entrusting them to do that job well: “We all had our trademark games, that week in and week out, we could realistically perform.“

When asked where the money comes from in AFL, Andrew described the valuable contribution of the Swan’s corporate partners and the importance of delivering measurable results to them: “The old ‘sponsor’ doesn’t exist … You go and have a serious conversation with people running serious businesses and they’ll invest money into you, if you can deliver outcomes that will drive their business.”

During the Q&A session, Mike, who is now an investment banker with Moelis Australia, talked about his career transition and provided some advice to the audience: “The hardest thing for athletes and I suspect probably just for people more generally – is to be patient.  Any change that you are going to make in your life, no matter how big it is – it always takes time – time is always the best judge.”  In talking about the challenges of his new career, Mike said, “It’s a matter of how you react to those challenges, the attitude you apply on top of that, and then also the ability to consistently keep putting in that effort and keep going, and over time, you’ll get an outcome.”