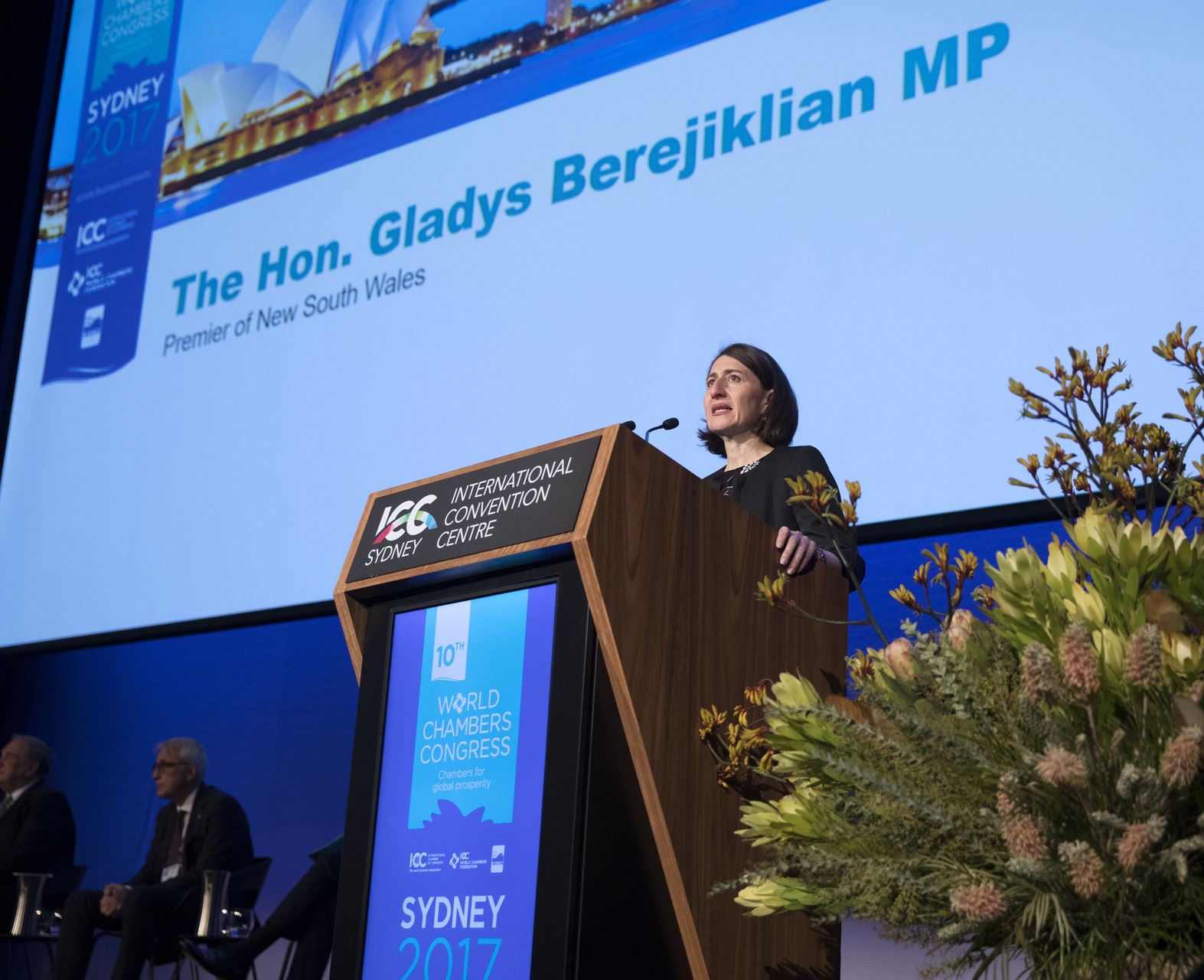 More than 1,000 business leaders and chambers of commerce members from 100 countries descended upon Sydney 19-21 September for the 10th World Chambers Congress, held at the International Convention Centre in Darling Harbour.

Under the theme “Where Business Connects” delegates had the opportunity to discuss some of the world’s most pressing challenges. It was also an opportunity for members to meet and strengthen existing business relationships.

New South Wales Premier Gladys Berejiklian officially opened the Congress noting that in this time of disruption and rapid economic change, “chambers of commerce were vital as partners for governments and the community in pursuing economic opportunities and generating investment, innovation and jobs.”

How can businesses with limited time and resources make a difference when it comes to peace-building efforts? This was a question raised in the first plenary session of the Congress which focused on business, conflict and terrorism. Session moderator Steve Killelea, president of the Institute for Economics and Peace, honed in on the interplay between business, peace and economic development and urged chamber members to be pivotal in communicating this relationship to governments.

Enlightening the audience with ways to attain sustainable business models, author and ZERI founder Gunter Pauli called on delegates to ditch business planning in favour of taking concrete action, which got delegates going on Twitter. “Scan for opportunities to implement new business models that will transform economies,” he urged.

In a talk about how protectionism around migration is leading to missed opportunities delegates were called upon to give refugees a chance to integrate and contribute as this makes good economic sense.  Volker Treier, deputy chief executive officer of the Association of German Chambers of Industry and Commerce, said chambers could take the lead on informing and advising business on the benefits of migration, identifying and assessing refugee skills, and providing training.

In the opening plenary session, Umit Subasi, president of Campbell Arnott’s Asia-Pacific business, told members that “leadership isn’t about our egos, it’s about our ability to learn, then unlearn so that we can re-learn again. If we want to keep growing, we have to let go of the ‘achieved’ and move on to the next thing.”

Also talking leadership was Esko Aho, the former Prime Minister of Finland, who made the points that…“good leaders are conceptual but are able to change concepts quickly in times of crisis” and “political leaders really needed to understand the business environment.”

He called profit-driven companies with dysfunctional cultures “caterpillars” while companies that honed in on people were more likely to be “butterflies.”

In the second plenary session, Cedric Chehab, head of global strategy for BMI Research, talked about global trends with a particular focus on China’s rising economic star. He noted that with rising urbanisation during rapid population growth there could be huge business challenges but also opportunities in countries like Ethiopia, Nigeria and Pakistan.

In a session called the 4th industrial revolution, Robert Wickham, regional vice-president, innovation and digital transformation at Salesforce, told the audience “we’re moving from reactive to proactive to predictive processes, otherwise known as intimate computing” and “we’ve entered the spring of artificial intelligence.”

Fellow panelist Ken Kroeger executive chairman of Seeing Machines, talked about driverless cars noting they will change the way cities work, how governments take in and spend money, and that “full automation, while we don’t know how long it will take, we know it will change our lives.”

This was the first time Sydney had hosted the Congress. In 2019, the baton passes to the Brazilian Confederation of Trade and Business Associations who will host the 11th World Chambers Congress in Rio de Janeiro.